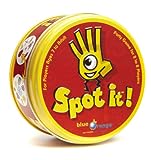 The Smash Hit Party Game Spot it! is the addictive, feverishly fun matching game for every generation. The first thing to know about Spot it! is that there is always one, and only one, matching symbol between any two cards. Got it? Now all you need is a sharp eye and a quick hand to play all five party games packed into the grab 'n' go tin. Including up to eight players, Spot it! is a cinch to learn, plays fast, and is irresistibly fun for all ages! Once you "spot", the fun don't stop. Si