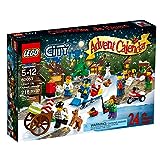 Make every day a festive building adventure as you count down to Christmas with the LEGO City Advent Calendar! Take the boy to post a letter to Santa, build a snowman, visit the Christmas market and go ice-skating with his friend. Play with an early Christmas gift of a duck built from LEGO bricks. Help the police to build an awesome sled to catch the crook who's stolen the presents. Then it's time for a celebration feast, exchanging gifts around the Christmas tree and a visit from a very special